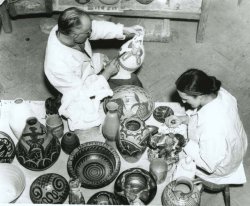 Studio pottery in Britain was a product of the early twentieth century. Middle-class art school trained artists began to make pottery undertaking the whole process for themselves. Previously pottery production, especially throwing and firing, had been an artisan activity. For women who took up the craft it broke both class and gender stereotypes. Frances Richards set up her kiln in her garden in Highgate in London.

Katharine Pleydell-Bouverie and Norah Braden worked in close companionship on the former’s family estate.They experimented with ash glazes and a temperamental wood-fired kiln which had to be fed with fuel through the night to reach the required temperature.

Charles and Nell Vyse were based in Chelsea and, although best known for their figures of London characters, they also re-created oriental forms and glazes and pottery in a more art deco style. Charles Vyse was a sculptor by training but it was Nell Vyse who specialised in the glaze technology.