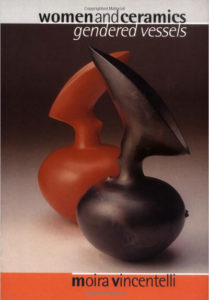 The Biographies have been prepared by Anna Hale, Elizabeth McDermott and Moira Vincentelli.

From humble cooking pot to postmodern vessel, women have had a special relationship with fired clay. Since the earliest times women have made pottery and clay sculptures; they have cooked, carried water, stored and served food in pottery. They have used ceramics in domestic rituals and decorative display. Women have also left their mark in the field of ceramics as writers, teachers, business women, gallery owners and collectors.

The exhibition draws on the collections in Aberystwyth and seeks to illustrate the relationship of women and ceramics with special reference to contemporary work. The exhibition is based on the book Women and Ceramics, Gendered Vessels by Moira Vincentelli, curator of the ceramic collection.

The invention of pottery transformed society. Pottery improved storage for grains and liquids and increased ways in which food could be prepared and consumed. Early pottery is often associated with more sedentary societies and the development of agriculture.

In many pre-industrialised societies pottery is a predominantly female activity and hence it seems likely that much of the earliest pottery was made by women.

To this day in most of Africa, among Native Americans from Northern Canada through to Central and South America, in many parts of Asia and even in places in Europe women make pottery by hand-building and firing in bonfires or simple kilns. The techniques are handed down from mother to daughter and are a recognised feminine attribute. Production may be a seasonal or year-round activity and the work is made for personal use, for barter or for sale in a market economy.