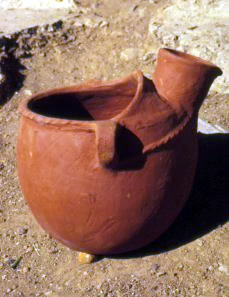 In Cyprus there are still a number of villages which preserve the old traditions of hand-building pottery.

In the 19th century it was frequently a family business where men made the huge storage jars which are too large to be made on the wheel, sometimes travelling round to make pots where they were needed, while the women made a wide range of domestic pottery.

Nowadays it is a mainly female activity focused on the production of large jars for gardens and patios and small-scale sculptural and decorative pieces which cater for the tourist and urban market. Men are often involved in firing the simple one-chamber kilns.