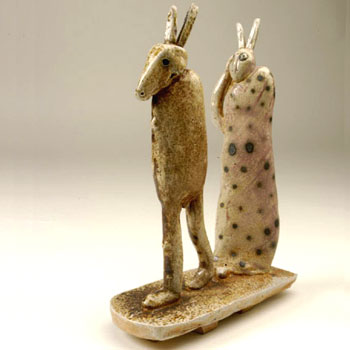 Animals and birds have played a vital role in human existence and have been interpreted in clay throughout history. Figurative forms in fired clay date back 25,000 years and were made many thousands of years before pottery vessels. Sometimes animal models were used as lucky charms or toys but they have also been given human characteristics and used to convey emotional states. The studio pottery movement of the 20th century favoured the functional vessel but some ceramic artists from the Martin Brothers around 1900 to Picasso in the 1950s have enjoyed using animal forms. The increased interest in figurative forms among young ceramic artists has led to much exciting experimental work in recent years. Welsh artists have been in the forefront of some of this activity.

Fantasy animals populate ancient mythology but are still familiar to us today. The Welsh dragon is a powerful symbol of national identity and a lively visual motif that helps to sell products at home and abroad. Dragons are equally important in Chinese culture and appear on ceramics in many forms. The twisting body and flicking tail of the lizard, the dragon’s more ‘real’ relative, has also appealed to ceramic artists.

Sometimes animal forms have been transformed into vessels. Cow creamer milk jugs were popular mass-produced items in the 19th century and could be hand-painted but more commonly transfer-printed. They must have been difficult to clean and probably were not much used, but would have been bought as gifts and displayed as decoration on kitchen dressers. As a recent graduate in ceramics, Justin James chose this theme to make modern witty versions of the cow creamer.

Some of the artists are inspired by stories. Conception Anguilar from Mexico models her version of the biblical story of Noah’s Ark and Welsh folktales of wild dogs and drowned villages are a source for Catrin Howell’s work. Others put animals into strange contexts and encourage the viewer to identify as they comment on the human condition. Insect-like creatures struggle from under a cabbage leaf; the crowned goose has delusions of grandeur and Meri Wells’ figures are forever locked apart in mutual misunderstanding. Finally, in a starkly modern comment from South Africa, Wonderboy Nxumalo inscribes his monkey mug with a warning about the dangers of AIDS.

Fantasy animals carry cultural messages. They may be witty or puzzling but they can also be disturbing and deeply serious.

Additional educational material can be found on the website here

This exhibition is a touring display with handling collection from the Ceramic Collection and Archive, University of Wales Aberystwyth arranged with support from the Council of Museums in Wales.