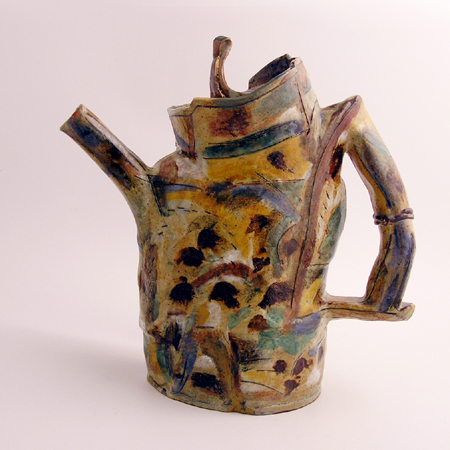 Tea drinking is a global affair. From the Japanese tea ceremony to the British cuppa, tea is intimately associated with social life. Ceramic objects such as teapots, tea bowls, cups and mugs are all part of the pleasure of drinking tea. A plastic cup is never the same. Tea was first grown in the East and was known many thousands of years ago but became the staple drink in China during the Tang dynasty (618-906AD). First introduced into Britain in the 17th century, by the 18th century it became a fashionable drink for polite society. It was still quite expensive and, appropriately for a drink from the Orient, was often drunk from imported Chinese porcelain cups.

Teapots could be metal or ceramic but the cups were best in ceramic as they kept the liquid hot but were comfortable to hold and drink from. In the 19th century under colonial rule the British established huge tea plantations in India and Ceylon, tea could be imported more cheaply, and it became the drink of the masses. Tea drinking was especially associated with women and the domestic setting and was seen as an alternative to alcoholic drinks such as gin or beer. Teapots and tea sets with matching cups and saucers were part of everybody’s domestic goods and were designed to appeal to the fashionable styles of successive periods. They continue to be popular items for wedding presents.

Novelty teapots also have a long history and teapots have always appealed to the collectors’ market. From the 1920s studio potters rose to the challenge of making teapots that were both functional and visually satisfying. In recent decades, however, ceramic artists have increasingly used the teapot as a theme to explore ideas about art and craft. Thus, a number of these pieces made after the 1980s could be classed as post-modern, in so far as they make an ironic reference to familiar everyday tableware but turn them into objects of contemplation or display.