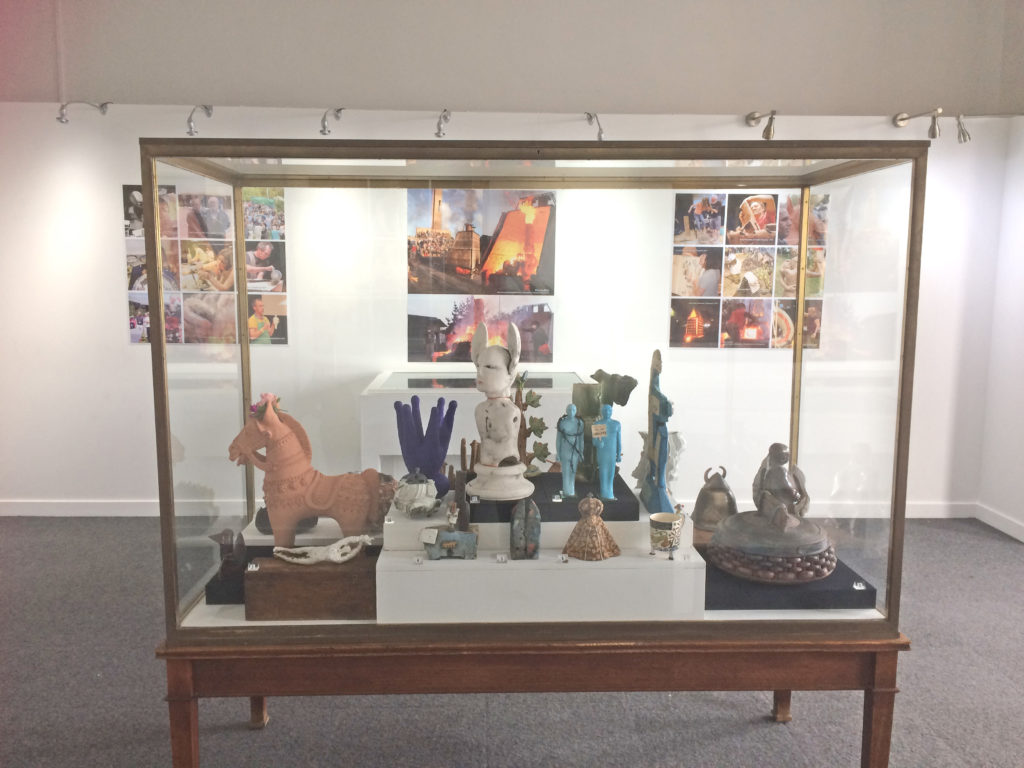 The World at Our Fingertips

An exhibition featuring works in the collection acquired through the International Ceramics Festival over the past 30 years.

Since 1987, the Collection has acquired work from the International Ceramics Festival held every two years at Aberystwyth Arts Centre. In over 30 years the Festival has featured more than 200 celebrated ceramicists from the UK and around the world including Japan, China, Eastern Europe and North America. The invited guests showcase their work through demonstrations, exhibitions, kiln firings and lectures over a mid-summer weekend. Potters from as far as Africa, India, Indonesia and South America have also participated, giving us a unique opportunity to witness their traditional methods of making and decorating ceramics.

The University frequently purchases work from the demonstrator’s exhibition during each Festival, often with financial assistance from the V&A Purchase Grant Fund and the Art Fund.  Sometimes the visiting artists donate work that they have brought with them for exhibition purposes, or pieces they have made during the Festival.

Festival activities are documented through photographs and recordings which are catalogued and stored in the Ceramic Archive. The Festival pieces in the Collection have a special place; not only is there archival evidence of how they are made, but also a cherished collective memory of the makers’ visit to Aberystwyth.

“Now we understand…now we know why potters do it, why you are so passionate about your art, the process is just so beautiful” Audience member to Rita Gudino in 2015

Fired clay objects have been made around the world for many thousands of years. How they are designed, constructed and used, can tell us much about the societies in which they are produced. Pottery traditions from many periods and countries are represented in the Ceramics Collection of Aberystwyth University.

One of the first people to donate ceramics to the collection was George E. J. Powell of Nanteos, near Aberystwyth. Powell collected examples of contemporary Japanese Satsuma pottery as well as other earlier ceramics from the far and middle east and Europe. He bequeathed these to the university in 1882.

Between the two World Wars the university was given money by the Davies sisters of Gregynog to establish an Arts and Craft Museum. Sidney Kyffin Greenslade (1867-1955), the first architect of the National Library or Wales, was appointed as ‘Consulting Curator’.

Greenslade purchased works by the emerging Studio Potters, men and women who made, decorated and fired their own pottery. He also purchased examples of historical pottery from the Japan, China and Europe that had influenced these contemporary potters so visitors could make comparisons between new and old ways of working. Greenslade and the drawing master Dan Jones purchased many examples of Welsh slipware pottery made at Buckley in North Wales. At this point most of the purchases for the collection were made at the shops of dealers or at sale rooms in the UK and sometimes in Europe.

After the Second World War the Arts and Craft Museum and its collections were used less and less and many things were put into storage or hidden away in peoples’ offices. However, in 1974 attempts were made by staff of the then Visual Art Department, Moira Vincentelli and Alistair Crawford to revive the collection, catalogue it properly and begin purchasing work again to bring the collections up to date. At this time there was a revival of interest in the crafts in the UK and, with the development of the Welsh Arts Council and the Crafts Council in the 1990s, there was greater opportunity to purchase international ceramics through exhibitions, symposiums and events held in Wales.