Terry Bell-Hughes is a modest man who has pursued a portfolio career as a potter and a teacher in North Wales for forty years. He has held fast to the values that were first introduced to him on the pottery course at Harrow in the 1960s and produces functional stoneware using ash glazes and slips. He makes teapots, plates, jugs and jars and enjoys the idea that these pieces can be used but they take a step beyond function with the quirky embellishments of figurative elements, the bold cut lugs on the jars and the flying handles.

Terry worked for ten years at Potter’s Croft, Oxshott, home of Denise Wren, a pioneer studio potter and teacher who was well known in the 1960s for making eccentric model elephants. The distinctive shape is one of the animal forms that appear on his pieces almost like a signature element. His works make other references – his jugs have their forebears in medieval prototypes and the teapots with triangular lids and tripod feet can evoke votive vessels from other cultures. Thus, his pots may have a practical use but they are also objects for display and contemplation.

This solo show is a new body of work all produced in the last nine months following a successful grant application to develop new clay bodies and slips and to work on a larger scale. ‘There were some successes and some failures’, he comments. The ash from a domestic fire is the basis of many of the glazes and he relishes the idea that he is incorporating materials to hand. The vessels will start from a thrown form but the slight twisting and indentations emphasise the plasticity of the clay further highlighted or contrasted by the bold and unexpected designs of the handles. For this exhibition Terry Bell-Hughes has created families of forms which look well in groups but each is a one-off piece designed to intrigue and delight.

To see work by Terry Bell Hughes in the Ceramics Collection click  here. 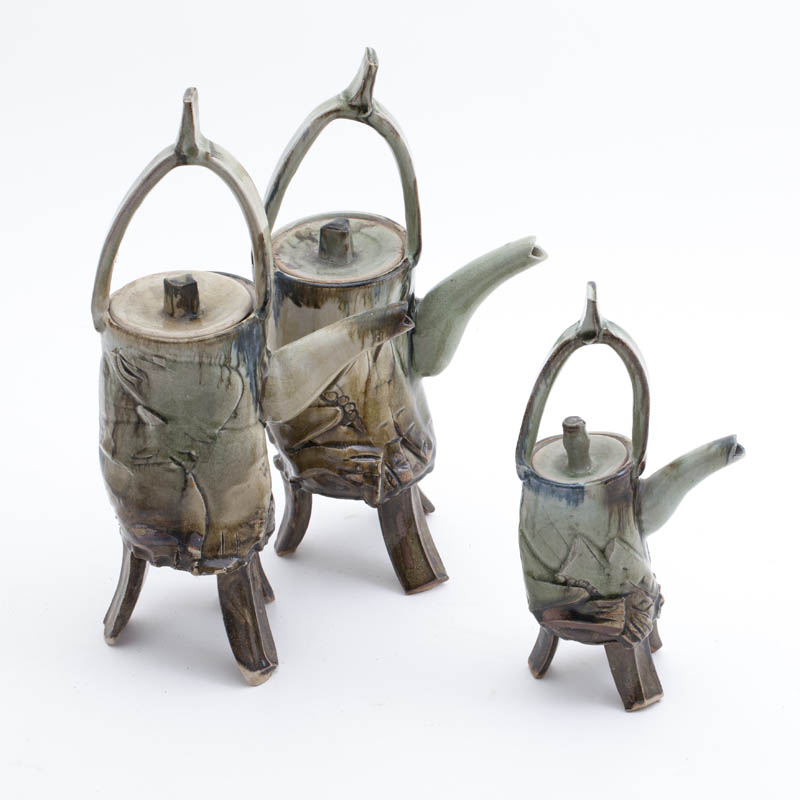