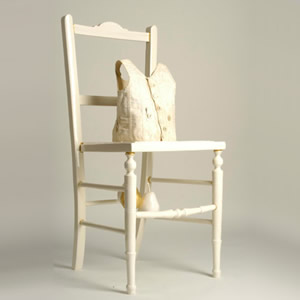 Report of the exhibition which appeared in CREFFT, 1995

An exhibition of the prize winning installation work by Marcus Thomas arranged by the artist in conjunction with pieces from the ceramic collection and domestic objects selected from the collection of Ceredigion Museum. The imaginative display provocatively and poetically raised issues of gender and Welsh identity

In 1994 Marcus Thomas won the craft medal at the National Eisteddfod. Some were delighted to see such ambitious installation work in ceramics, others were not so pleased. Is it really craft, they asked? Marcus Thomas is no purist. He has no deep-seated allegiance to the medium, his central concern is the message. But part of that message is about ceramics and, indeed, the properties of clay itself: for example, the way that slipcast clay can be used to create facsimiles of the real thing, even improbable things such as chairs. His works play on the difference between the hand-made and the mass produced. It is a nice irony that the dozens of jelly moulds decorated with transfer prints seem to epitomise mass production yet they are, in fact, hand-made.

In the last few years a number of museums have looked at the way that contemporary artists can be used to create work to interact with a permanent collection. In March this year Marcus Thomas was invited to set up his installation in the ceramic gallery in Aberystwyth and to show his work alongside pieces from the ceramic collection and other relevant objects generously lent by Ceredigion Museum. The exhibition formed part of a collaborative project with students of the School of Art in Aberystwyth who worked with the artist to create the display. The original installation drew on memories from his childhood: the stern faces of Welsh preachers from prints in the chapel vestry, the china display, the Staffordshire dogs – objects that evoked the underlying divisions in the social order: male and female; adult and child; powerful and weak.

The stores of Ceredigion Museum provided a rich source of additional material which could be deployed to create new stories and tease out the meanings. Thomas arranges objects exquisitely. He plays on the contrasts of form: soft round fruit against hard angular chair or the repeated undulating shapes of jelly moulds, piled up or arranged in rows. The Surrealists were among the first to use the idea of decontextualising objects or juxtaposing them in unexpected ways to give the banal trivialities of everyday life a new sense of significance. Thomas uses this device to good effect. A Buckley slipware dish with its cosy inscription ‘Home his home be it never so homely’ sits meaningfully between two white ceramic chairs one with a child’s vest (what I was brought up to call ‘a liberty bodice’) on the seat, the other with a nineteenth century pottery lion. Facing them another couple of real wooden chairs with ceramic objects on them. Is a wooden chair more real than a ceramic one? Are couples of chairs like couples of people, like married couples? The meanings generated by such a display are open-ended and are intended to encourage the viewer to bring their own memories and imaginings into play. Just let the mind wander you will be richly repaid.