The Ceramic Studio in Kecskemét is a survivor. It was founded in the early 1970s along with a number of similar organisations to promote specialist art forms including dance, music and literature. These small enclaves of free spirit asserted national identity and even international exchange in the relatively safe space of cultural production at a time when many Hungarians would have considered themselves to be an occupied nation. But these organisations were supported by the state and with the fall of communism most have found it difficult to keep going. Largely due to the determination and skills of the director, János Probstner, the International Ceramic Studio at Kecskemét has survived – but it has had to adapt.

The Symposium Hot off the Press Two is one such adaptation. Arranged by Paul Scott (GB) and Maria Geszler (H) it was different in two ways. Unusually the sixteen artists invited all had a common link – they used print on ceramics (most were exhibitors in the touring exhibition of the same name). Secondly the duration of the event was shorter – just two weeks as opposed to the usual minimum of six weeks. It was an intense fortnight. The artists had to produce work for two exhibitions within ten days. All had also been asked to bring a piece with them.

The studio is a delightful labyrinthine affair of one and two-storey buildings laid out around grassy courtyards punctuated by the odd wood-firing kiln or curious examples of ceramic sculpture. The numerous studio spaces alternate with ceramic stores and kiln rooms. For the modern ceramic artist the facilities are excellent and the technical support superb but the symposium was also an opportunity for the studio to take a leap forward into new technologies.

Work started on Monday morning early. The first few days were marked by forays to art suppliers in Budapest and printers in Kecskemét, excitement over sources of new materials and puzzlement over ingredients. Newly-delivered screen-printing equipment caused considerable debate although with a bit of international cooperation and experimentation it was eventually well used. 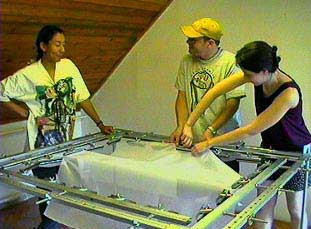 Most of the artists, it appeared, usually had screens made up by specialists. But the event was to become more hi-tech. On Tuesday a state-of-the art Macintosh computer was delivered with scanners, and colour printers. The technicians stayed for two days – more international relations, more heated discussions in Hungarian and in English with occasional spatters of German. Eventually it was all working.

A few people knew how to use the computer, others just knew what they wanted to do. It took some further international cooperation, caused some briefly-strained friendships, created a few disappointments but some spectacular successes. Interestingly the photocopier often seemed the most essential piece of equipment.

Most of the participants work primarily in ceramics but for many of them it is idea and concept that is at least as important as the medium. They are promiscuous in their borrowings but usually prefer popular culture and kitsch to high art. Frequently plundered is the history of ceramics itself.

Low-flying jets or cooling towers appear between the trees in the blue-and-white transfer-printed scenes on Paul Scott’s (GB) plates. 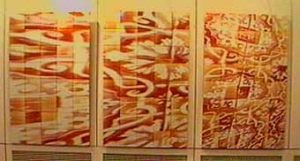 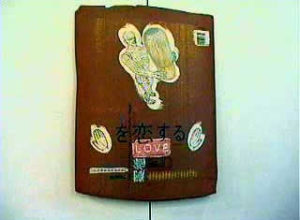 Conrad Atkinson‘s (USA/GB) ceramic ‘landmine’ printed with images of Princess Diana was undoubtedly the most overtly political piece but much of the work alluded to issues of gender, violence, environment and media. 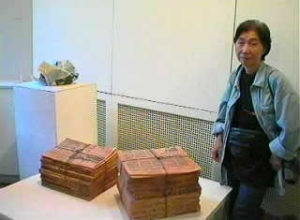 For example, Mishima Kimiyo‘s (Japan) spectacular ceramic sculptures of giant-sized newspapers are also metaphoric monuments to question the power of the press 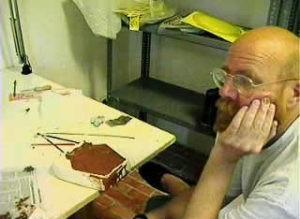 The last Thursday and Friday were tense days with the mounting of two different exhibitions, one in the library in Kecskemét and one at the Art School gallery in Budapest. But by the time of the openings all was in place, the speeches were made, the wine flowed and the TV cameras rolled. On the final Saturday the ceramic studio itself held an open day. The enthusiasm and support for the activities of the studio was impressive. The sun beat down and the studios swarmed with people – potters and school teachers who wanted explanations of techniques, children who wanted to have a go – especially at Katy Bunnell’s cutting machine attached to a laptop computer. More animated discussions, more international relations. It felt good.

The symposium brought together artists, many who had never met or, if so only briefly, and allowed a more extended exchange of ideas and opinions. Some had made good work, others were less satisfied with what they achieved but all had gained something from the experience. I certainly collected some wonderful tape-recordings and video material for the Ceramic Archive at Aberystwyth – and I learned a bit about Apple Macs and a lot about print and ceramics. The ceramic studio at Kecskemét with its generous facilities and its expanding collection (now nearly 3000 pieces) is a precious space and a model of support for ceramic art production.
Long may it flourish.