View in collection Born in Sudan Africa, he claimed he enjoyed playing with mud on the banks of the rver Nile and this is what gave him an interest in pottery. He trained at Khartoum Art School (1952-1955) and became a calligrapher. He studied in London shortly after at the Central School of Art and returned to Sudan to teach. As a teacher at Khartoum, he encouraged his students to look towards their own culture and traditions, often bringing his classes to analyse shapes at the Ethnographical Museum. He settled in England permanently in 1967 finding  it a more creative environment. He continued to teach in the UK and featured in the Aberystwyth Ceramics festival in 1987. He threw mainly stoneware pots as well as using traditional African techniques such as burnishing and the colours of Nubia House decoration. He used charity shop bought knitting needles to score designs on his pots that often display his calligraphic skills and incorporate British graphic designs that interested him such as the Guardian Crossword, CND or Rolls Royce Logo. His signature is a symbol of a scorpion, a reminder of his home in the desert. 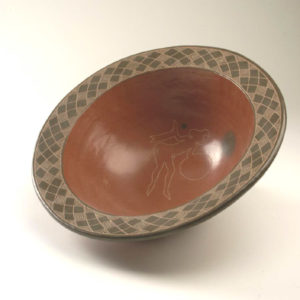 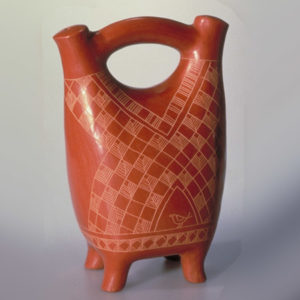