View in collection Magdalene Odundo was born in Nairobi, Kenya and educated in Kenya and India.  Coming to Britain on 1971, she studied in Surrey and at the Royal College of Art.  She has travelled throughout Europe, America and Africa, drawing on sources as varied as the pottery of New Mexico, the body art of Central Africa, and the forms of early Greek sculpture. Her work is highly regarded and is represented in major national and private collections including the Art Institute, Chicago, the British Museum, the Ashmolean and the Victoria and Albert Museum.  Odundo’s work is hand built, using a coiling technique. Each piece is burnished, covered with slip, and then burnished again. The pieces are fired in an oxidizing atmosphere, which turns them a red-orange. A second firing in an oxygen-poor or reducing atmosphere causes the clay to turn black. It is debated whether her work shows evidence of her African roots or whether it is universal in character. Since 2001 she has been Professor of Ceramics at the Surrey Institute of Art & Design, University College. In 2008 she was awarded an OBE in the Queen’s Birthday Honours list for services to the arts. 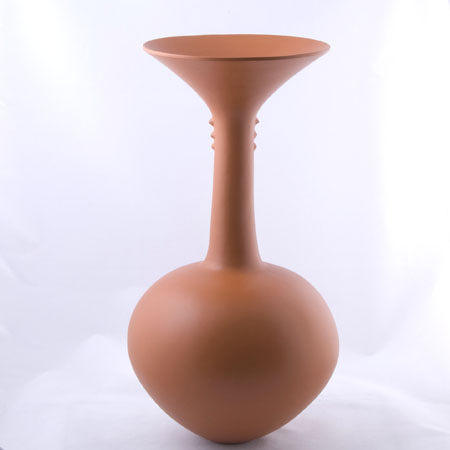 C1662
We use cookies to ensure that we give you the best experience on our website. If you continue to use this site we will assume that you are happy with it.Ok